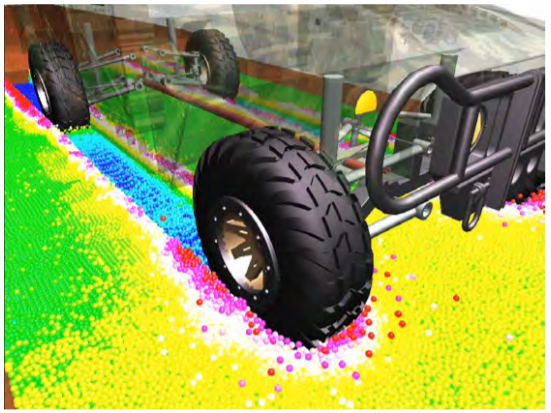 Autonomous vehicles offer a new approach to military situations, but operating in an unfamiliar, off-roach environment can be hazardous. Researchers are interested in improving vehicle performance by reducing the time it takes to evaluate traction as the vehicle’s wheels encounter changing soil conditions to ensure safe navigation.

“For military ground vehicles, mobility maps which provide maximum predicted speeds in off-road terrains are critical for mission success,” said Shravan Veerapaneni, Associate Professor of Mathematics at the University of Michigan and Principal Investigator on the project. “A robust approach to creating them is to employ physics-based modeling and simulation. However, current technologies capable of doing so are prohibitively expensive as the required calculations take several weeks on modern supercomputers.”

While the physics model is robust, it can be expensive, laborious and time consuming. Veerapaneni and his team of mathematicians are developing innovative computational algorithms that accelerate the solution of mathematical equations that make up the physics models to produce more accurate simulations of real-world conditions that can be used to maneuver an autonomous vehicle through off-road terrains.

“In order to develop faster methods to solve linear system of equations, you need to leverage structure in the matrices involved,” said Eduardo Corona, Assistant Professor of Mathematics at New York Institute of Technology (formerly a postdoc at UM) and key contributing member of the project. “We are building on past work in terramechanics and our own work on tensor decompositions to exploit matrix structure and perform fast linear algebra.”

According to Corona, the number of soil particles interacting is quite large in a system that is constantly changing. The traditional approach models the discrete characteristics of sediment grains, which vary by size, shape, and composition, and explores the physical forces, such as gravity, inertia, and drag, as well as repulsive and dissipative forces, as the grains collide.

In order to tackle this challenge, they modeled the forces acting on each grain as well as the forces the grain is projecting into the environment. The model explores this approach through a series of time steps. The team then exploited redundancies in the data to compress the matrix so they could apply and invert computations faster. This approach not only increased the speed of the calculations, it also reduced the memory needed to compute the calculations.

“These maps would typically take weeks using a supercomputer,” said Veerapaneni. “Using these methods, we can bring the simulation down to real-time. This approach is game changing.”

While this project is mainly focused on military applications, the team members and their collaborators are applying the research outcomes to a diverse set of fields, from nanotechnology to biophysics, as the underlying mathematical models share similar computational bottlenecks.